Even if not everything went in the wished direction was a good day. I favoured Chelsea and Schalke but both teams couldn't take the three points to their home. The team from London even lost a second time to the suprising FC Basel. I am proud supporter of FC Basel since over 30 years... but with betting is not allowed to have emocions.

Well I tried some pre game trades and they worked quiet good. Like I wrote above I was pretty sure that the odds of Chelsea and Schalke will drop. Beside I layed a scoreless match between Arsenal and Marseille. Unfortunately I fixed too much money for this trade, so the better ones (Chelsea and Schalke) were not that lucrative.

During the game the performances of Schalke and Chelsea were quiet disappointing. So I decided to put some money for the other outcomes. In the end the results were like mentioned not in my favour. Better was the trading at correct score market in the game between Arsenal and Marseille. I expected a score between 1:0 and 3:3, so I layed 0:0 and unquoted. In the end a 3:0 would be the best for me, but I also could live with the endscore of 2:0.

Beside I wanted to make some money with a comeback of Porto. Unfortunately they only score the 1:1 equalizer and ended in a poor draw against Austria Wien. Actually I made a small mistake with trading, but I made my learnings for the future. With some risk (probably too much... I should not do to much freestyle betting) I corrected the bad trade with an under 5.5 bet. Well this time was a good move, but it can also turns bad. Discipline and patience have to improve further. 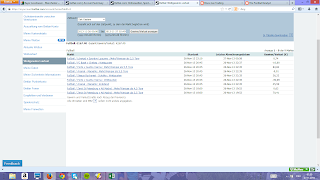 Tomorrow or let's better say today is again Champions League. Especially at the English teams I see some opportunities. In my opionion the odd of Manchester United (around 3.50) is too high. Okay, van Persie is not playing, neither Vidic... but Leverkusen is not Bayern Munich. Beside Manchster City is on a hot streak, a 0:0 lay around 30 seems good value for me. In this kind of matches you normally don't get odds under 38 to 40.

Well, let's see what wednesday will bring. I feel quiet positive that the two teams of Manchester will not disappoint me.