Since I am more cautious about money management things are getting better. It's tempting to stake big, but normally you lose exactly the overstaked trades. At tennis I risk less than 1% of the account at one trade. The suggestion of Sultan for beginners (like me) is at most 1-2%. Advanced traders can risk up to 5% to not lose more than 2.5% with redding a bad going trade. At some soccer strategies my stakes are higher, because it's a scalping approach. The target is not losing more than 5% in the worst case.

Tonight was really nice to trade tennis. There were a lot of value opportunities. Some of them I missed (wins of underdogs Anderson or Raonic), some of them I could make profit (slow starts of Djokovic and Jankovic). On the other hand I lost with backing Fognini and Haas. In my opinion their odds were too high and despite the lost money, I would do the same in a similar situation again. I start to get confident in value seeking. The bigger problem I see, it's the trading with the "green amount". Was not obvious that Djokovic and Radwanska will turn the games in their favour?! In retroperspective yes, but also the common patterns suggest that. So I wasted money in beeing too cautious with my "green amounts". I think this is the main difference between a regular trader (me) and a good one (Sultan). Without "big greens" you will not make the profit you need to cover the bad trades.

It's important that you let run the "greens" and cut the "reds". At least my hitting rate was enough high to cover the lost trades even with smaller greens. In the long term, I have to be more efficient in the winning stage of the trades. The other fields ("value seeking" and "redding") are on a level I am quiet happy about. 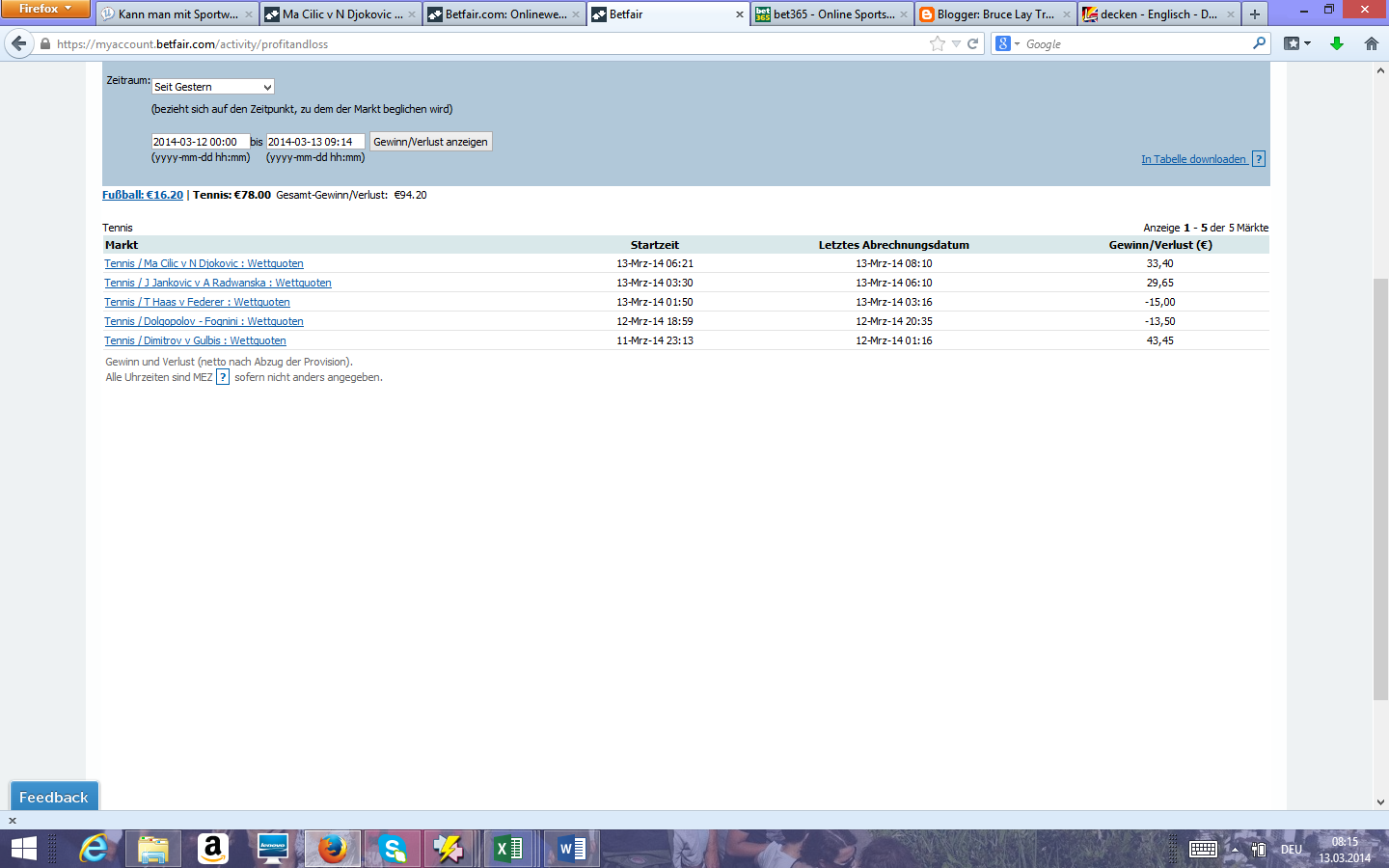 Tomorrow the tennis tournament in Indian Wells will continue. The highligts are the rematch from Australian Open final between Cibulkova and Li at women's draw. At men's tournament I look forward to the matchup between Dolgopolov and Raonic (instead the more expected Nadal vs. Murray).

At soccer the European League will continue. Will the FC Basel succeed against a strong Red Bull Salzburg? How will be the Italian Derby between Juventus and Fiorentina? Beside there are the Swiss icehockey playoffs. It's not an interest about betting for me, but as a fan of HC Davos I will watch the game against the Kloten Flyers. It will be definitely a highlight evening / night of sports again...