Yesterday I wrote that I am quiet confident with my strategies, especially at soccer. The monthly profit&loss statement confirms my feeling. I could almost reach a profit of 1'000 Euros in last four weeks. As a part time trader, I am quiet happy with this result. I think the limit is not reached yet, because there is still potential in rising the stakes and making less mistakes. If I would not make one at Paris's game the profit would be even higher... 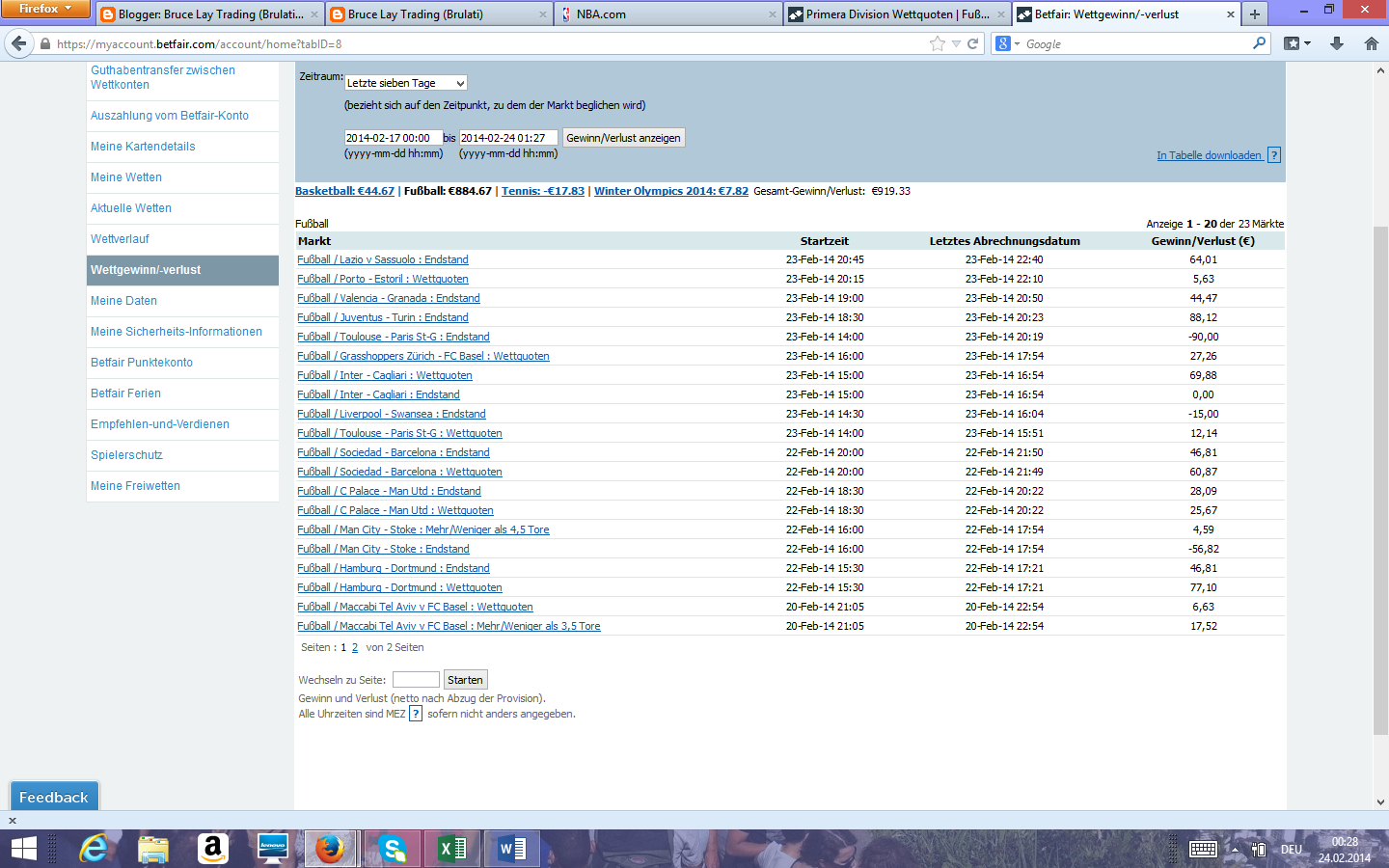 NBA is looking promising as well, but the playing hours are not really what I am looking for. Beside the confidence is not as high as at the soccer games. For me is still a bit of roulette. Is really difficult to read the game, the momentum  can change from one second to the other. Sometimes a team throws 80% in a quarter and five minutes later 10%... like Alchemist recommended, it makes sense to do some paper trading to get more trust in my strategies.

My last trading field is tennis. There are so much players, you need a lot of knowledge to be successful. Beside you have to watch as much as possible matches during a tournament. If you don't do this, you don't have enough information to find value. Last week Dolgopolov was on fire, but I didn't see him playing. So I never thought about laying Ferrer against him (H2H was 1:7)... It's just an example which shows that is quiet tricky to trade tennis against professional punters.

In summary I think I have to decide if I trade tennis or NBA beside soccer. Especially at tennis is a lot about watching, watching and watching again games. It's too time consuming to focus on tennis and NBA. Sometimes you need a rest. In general I see more potential at tennis. One reason is the higher amount of games. An other reason is s the bigger liquidity. Beside I think is easier to read the tennis players. Last but not least there are the "time factors". First you often bet against a team and the time (if you lay the leader) and beside is the mentioned topic about playing hours. Is really hard to stay awake during the whole night for waiting the right trading opportunity. Perhaps is easier in summer (but there is no NBA), when you have as a benefit a free afternoon for taking a sunbath... :-)

Next weeks I will watch basketball and tennis. I have to be sure which sports is better for me to trade. Like I wrote, I think is almost impossible to do both of them parallel... beside I hope that the results at soccer will stay as strong as in February.