The things changed dramatically in the last month. Some weeks ago I had big doubts about my future as a trader. Probably you read about my probems, I was stuck at breakeven level. Suddenly I have the right approach to trade. The slogan which brought me the success is quiet easy: "Expect the unexpected". This mindset helps a lot in trading, especially at soccer. I rised my bank around 20% in the last days, so I have now a decent buffer for a bad run.

Yesterday I wrote that I expect a 3:0 or 3:1 between Manchester City and Aston Villa. Jovetic scored the 3:0 at the 89th minute. At this moment I was big green and could lay the score for 1.17. I did this quiet big to secure the profit. I know that one swallow doesn't make the summer, but I am extremely confident that I found a system which works for me. It's still not perfect, but the general concept I like a lot.

At tennis I spotted pre game a lot of value. Almost all of "my players" won their matches or at least a set (Vinci, Giraldo, Pavlyuchenkova and Kuznetsova). Unfortunately I only placed two trades, because I was worried about a too early entry (before the start). I have to say that in general the strategy is based on inplay entries. In the last days I often missed good trades, because I hoped for an even better entry during the match. I talked about this issue with Sultan. He suggested me to enter the market, at the moment when I find value. Actually he is right, laying 1.45 at the beginning can be better value than 1.30 after one player made an (early) break. The bigger problem are the missed trades I mentioned above.

I decided to stake at least half of the whole amount at the start of the match if I find good value. With the other half I hope for an even a better price (if there is no lower price, my trade is a winner... not that bad neither :-)). If I see that the early entries are working, I can rise the stakes. Sultan prefers not to overcomplicate the things. Actually he is right, but I don't have his level to find always real value. So this way seems a good compromise for me.

Next days I can focus on tennis. There are no good soccer games until Sunday. I don't like to trade in leagues where the championship is already decided (like Germany or Italy). I will concentrate on Spain and England until the end of the season. I hate matches like AS Roma at Catania (4:1 for the home team). It's obvious that one team is not fighting anymore... so it's impossible to analyse the match in a proper way. 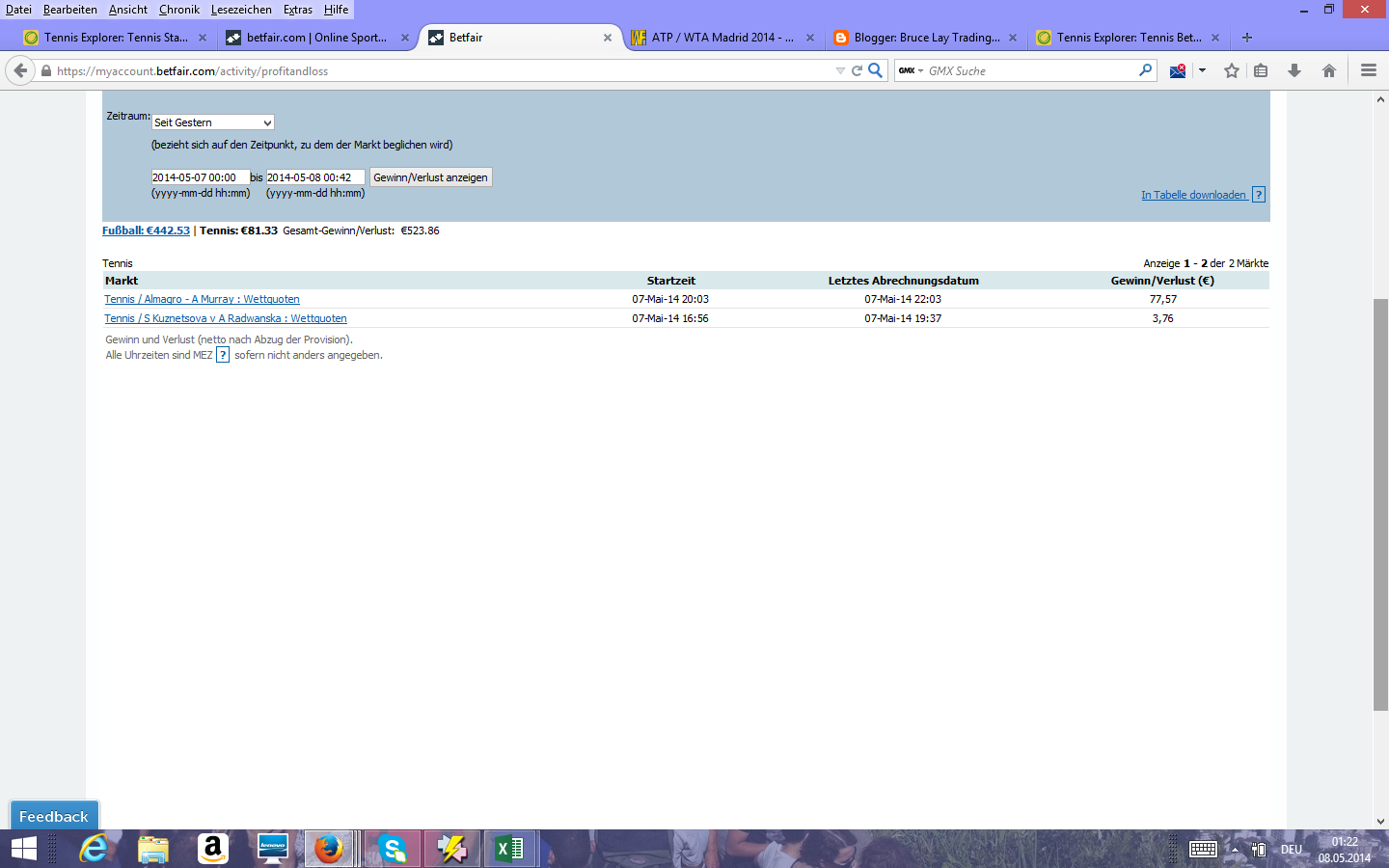