Some days ago I wrote that soccer is not made for trading. In general I have still this opinion, but today I found decent value at the corret score market. It seems that most traders expect a lot of goals when big teams like Barcelona, Real Madrid or Chelsea are playing (at home). Often the reality is different... in general I guess that there is more value at the under scores. I think it's because most bettors are afraid of the suspended sign. Beside football is about scoring, so the natural instinct tells us to go for the goals.

So far so good... During the game I traded, I reognized that laying the actual score and backing the unprobable outcomes (like 2:2 or 1:2 Valencia) had huge value. To be honest, in my past I lost a lot of bets with laying unprobable scores. A lot of newbies are looking for an easy win (Valencia 3:1 doesn't seem very probable,  that's true... but for 1.05 I would not back this result!), so they lay without thinking about the value. 1:3 for Valencia was traded at 20 after they scored the 1:2. I tell you, the counterattacks were really dangerous... so I was surprised to find such an odd.

I think I found a way for trading (and not betting) soccer. The correct score market it's quiet a good place to seek for value. You can react without any problems before and after a goal. It's easier as the match market (1X2) or the over/under because there you need a specific outcome. In my opinion you have more options to react inplay at the correct score market. Probably it's similar to horse trading, there are also a lot of possible outcomes (not only two or three like at the mentioned soccer markets).

Tennis is still my main interest. I feel a slightly progress. I am not yet a "chess player" which thinks four, five or even more steps ahead. If you can do this, you will succeed. Let's make an example. Angie Kerber had a nightmare start against Garcia, what I actually expected. To be honest I didn't lay her at the start, because I am not a fan of laying odds over 1.50. If the trade goes against me, it's pretty costly for a small profit. You can discuss about this approach, because value it's value... It's just my trading style. If Kerber would be ten ticks lower (unfortunately the price rised before the game) I would do it. So far so good... when she was 0:4 down, Garcia was traded under 1.45. That was the price you could more or less expect after she won the first set (if Kerber would not lose 0:6... but even in this case she would not be traded under 1.30). At this point was possible to make a "free bet" on Kerber until the end of the first set if you would think some steps ahead... Unfortunately I didn't take the opportunity. Kerber made three games in a row and the price of Garcia jumped again over 2.50. Without many risk (at most 15 Ticks... in a very bad case) you could make over 100 Ticks or more if Angie would win the first set... that's good trading. In the end, Garcia won the first set (6:3) and she was trading exactly at 1.45...

I layed Garcia too late and when Kerber retired I lost the whole stake. I would not say that it was a really poor trade, but after she took a medical time out (MTO) a too risky one. It's the second time in two weeks I lost the whole stake because of a retirment. Both times the players had a treatment before (both were Germans... I hope it was just random and has no meaning :-)). It's a learning for the future... if "my player" takes a MTO I will close the trade or at least reduce the stake.

In general I had a good day. I am more comfortable with the players. Not with all (for sure), but at a bigger tournament it's easier for me. The top50 of ATP and WTA players I know now quiet well and in Madrid are not so much more. :-)  Beside I am not mad anymore, when I miss a surprise. Okay, Berdych (against Berlocq) and Fognini (against Klizan) lost the finals after they won each the first set. Klizan was sick (he couldn't barely sit on his chair during the breaks) and Berlocq lost the first set 0:6. There was really no indication for comebacks. In earlier days I would be mad, not taking such trades... Right now I know that this would be just speculation on a very small probability (something like playing lotto). For fun you can try such a trade, but it's more a gamble. Above I wrote what's trading for me. I think it's a big step to recognize the difference between trading and hoping for a (surprise) outcome. There are a lot better games for possible swings. Klizan and especially Berlocq would train (like the prices suggested) in the normal case in no time to 1.01...

I registered at www.tennistv.com. I think it's a good addition to my bet365 account. The disadvantage it's a delay of around ten seconds against bet365, but I have bigger pictures and can watch up to four matches in the same screen. My trading style is not that much "in and out", so I can live with the mentioned delay. The stable and good quality pictures are worth it. Beside you can listen to interviews and inside information. It's a good source to improve my player knowledge.

Tomorrow I have to work again. It's a pity, these days are breaking my trading rhythm. On the other side this job gives me the financial security. At the moment it's too early to think about full time trading, but it's still my big target. I will keep you informed, have a great week! 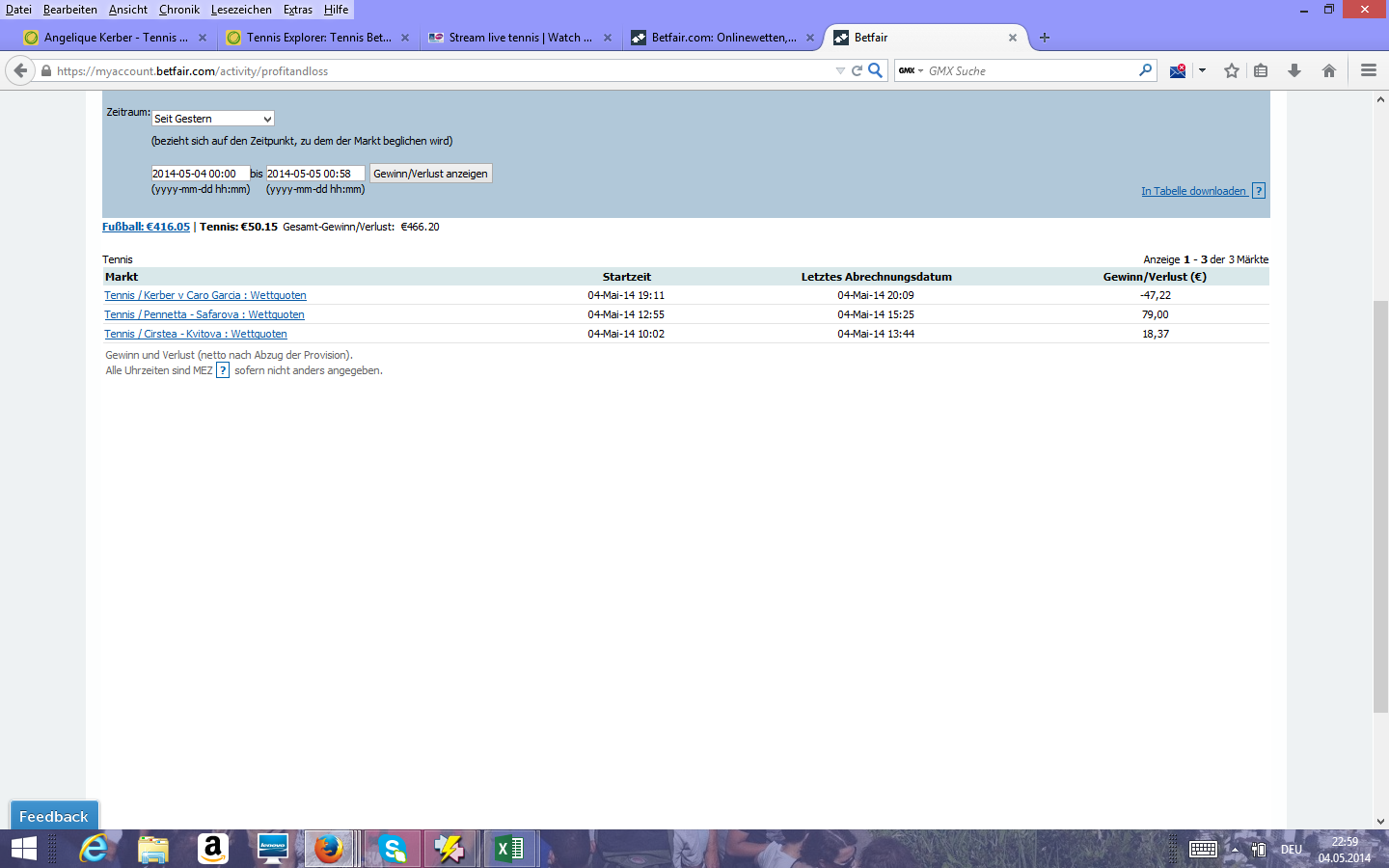