I wrote some days ago about my soccer trading and the high stakes. Now I definitely know that I overstaked. At the match beween Inter and Lazio I expected a lot of goals. Unfortunately I didn't trade out when the score was 3:1. I had a small cover at 4:1 and a big stake at 4:2. It's a pity that Miro Klose missed seconds before the end the 4:2. Instead of a big win, I had a small loss. Nothing special... you win and lose bets. Instead of taking a break, I started to chase. Like (almost) always this is the beginning of the end. I lost bigger, and I throw away a 1/3 of my bank!

Today I could regroup. I had some good tennis bets (I will talk later about them) and was more lucky with the chasing. I was desperate to reach at least the level I started some weeks ago. Fortunately I made it. I swear myself that I will definitely not do this anymore in the future. The chasing just started because the wrong stakes at soccer. It was the last proof that good money management it's the key to successful trading. I am still confident about my soccer strategy, but I have to make a big reduction of the stakes. I guess that I overstaked with factor 10! Good to know for the next soccer season. Until the world cup there are no more interesting matchups for me. Beside it's good to focus on tennis with the upcoming French Open.

At tennis things are going smooth. I was talking about my outright bet of Nishikori to win French Open. Since I backed him a few days ago the price fell from 70 to under 20 (at the time Nishikori was winning against Nadal in the final). I decided to hedge my trade for a free bet. I will wait at least until the draw is out for more profit taking. I don't expect that the Japanese will win the French Open, but I would not be surprised if he reaches the half final. Since I backed him at 70, the value is more or less gone. Now he is no real "black horse" anymore...  The market realized that he is really in a great shape. 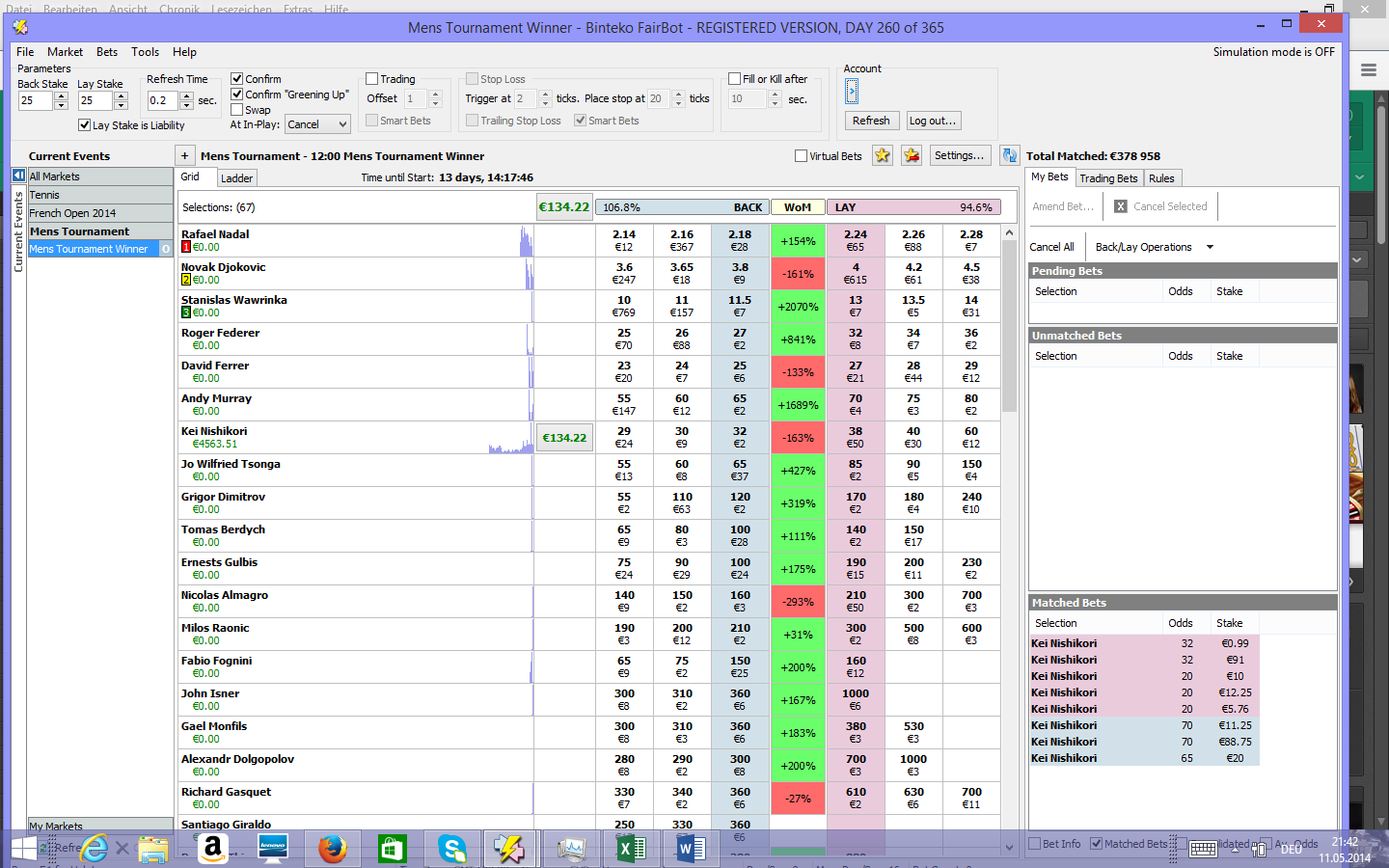 Beside I traded the finals of Madrid. I expected comebacks of Sharapova (at the start I backed Halep; after the first set I switched the position) and Nadal. I saw more or less all the matches of Nishikori. It was probable that his body will fail at some point. He had in every matchup like one or two treatments of his back. In comparison to the 1.08 Rafa-Backers I had not much risk when I layed Nishikori at 1.57. At this point Nadal was value. First of all the Spaniard started to play better and second I knew about the injury problems of Kei.

At tennis I have nothing to change. Since I enter with half of the stake to lay (value) odds over 1.40 I improved. I miss less opportunities and if the trade goes against me, I have the opportunity to enter for lower odds with the other half of the stake. It's an approach Sultan doesn't do, but after the "apprenticeship" it's good to develop more and more my own style. That's the reason for the blog's name. Bruce Lee ("Lay" it's a play on words) also combined the best techniques of different battle styles. This is exactly what I like to do... I try to take all the best of other traders and develop my own strategies.

Since the new start (at the first of May) I have a ROI of 6.87%. The sample is not enough big to tell that I am profitable now. I prefer to say something about the quality of my trades. I made 28 trades since the first of May. In this timeframe I just produced three bad ones, which I didn't follow the value strategy. That's a big step forward. I am now a lot more patient, and that's one of the keys to trade successful. The biggest issue it's still the trading in a winning position. I am too cautious. Instead of making too early "all green", it's better to ride the momentum. The screen is looking more comfortable in an "all green position", but even when a good trade starts to turn, you have enough time to hedge without a loss.

Next week it will take place the tournament of Rome. Another big event, unfortunately I have to work tomorow. Tuesday to Thursday will be my (busy) trading days. I hope I can continue with the good run. If I should have some losing days, I am not allowed to get a negative mindset. It's just the normal variance, even the best traders have good and bad runs...