At last posting I was asking myself some questions about trading basketball. Let's repeat them:

I think NBA is great to trade. You have swings, momentum changes and decent liquidity. Beside the market often is overreacting. All the traders know that a ten points deficit in the first quarter is nothing but the odd shortens like crazy. Yesterday this took place at game between Toronto Raptors and LA Clippers. The dog was was leading with ten points, the odd shortened to 1.40...

In general I am on the right way with my strategies. I have still the opinion that the value is often on the dogs side. But you can't pick every team. For example Milwaukee and Philadelphia are normally not good choices, neither yesterday. So is about selecting the right ones. It's all about quality over quanitity. You have to make your thoughts before the tip in. I still act with too much hectic. It's not so easy to trade 2-3 games parallel.

The most critical point is the win/loss-ratio in comparison to the yield per game. You are allowed to have a negative win/loss-ratio when your yield per game is high. Here I made some mistakes in the past. The profit&loss of my bad trades were to negative in comparison with the winners. It doesn't help much to have a win/loss-ratio of 7:1 when your yield with green  trades is in average only 10%. That is just an example, but the most important part is the yield of the green trades.

It has to be far over 100%, because the losing bets normally have a yield between -60% to -100%. So it's all about riding the "green wave". Yesterday I traded first time with this approach: 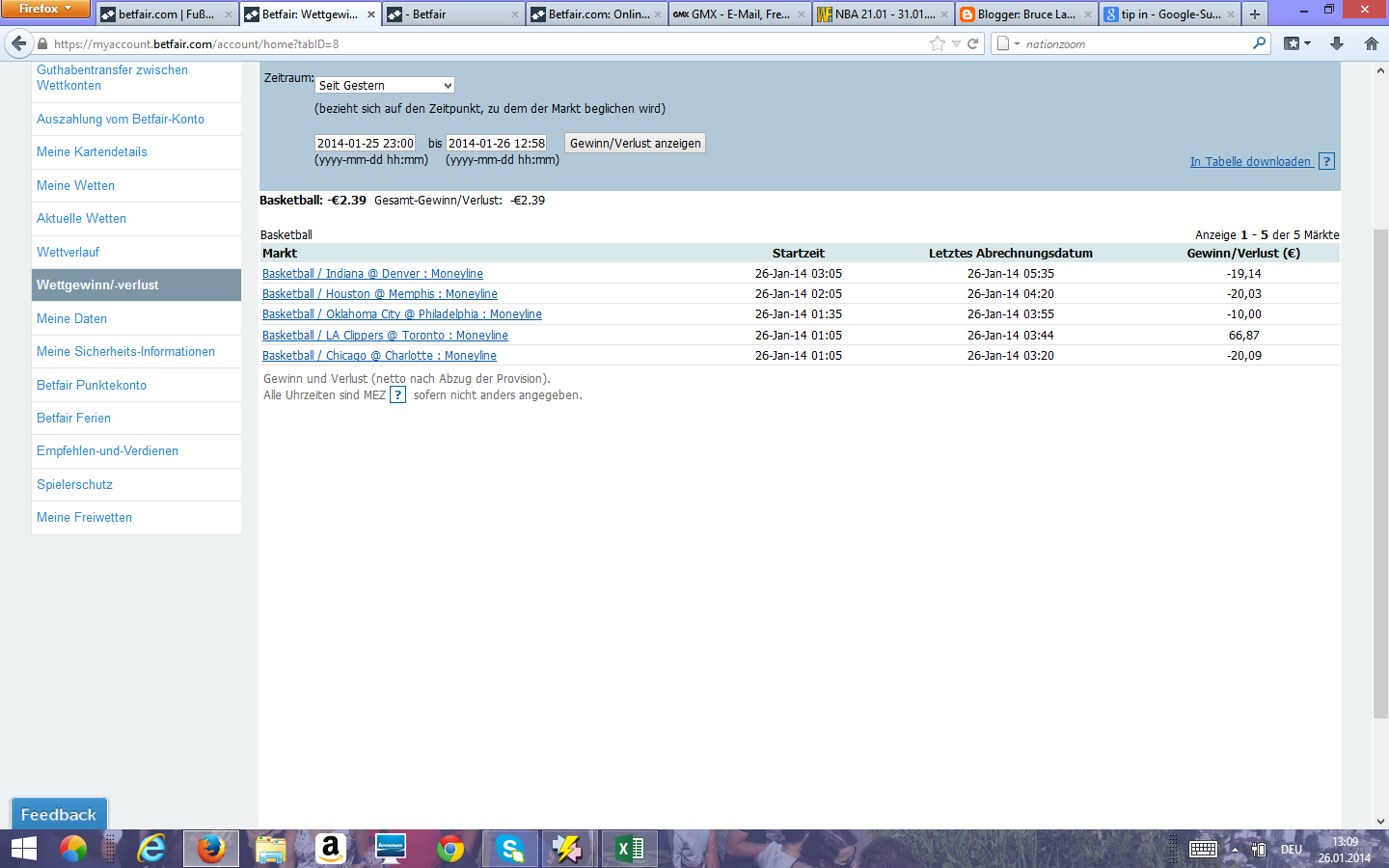 What do you see at printscreen? Despite four of five lost bets I almost had a profitable night. Just one more winner and the profit&loss would be really nice. Let's take a look at the games. Houston was trailling with ten points at half time. I didn't expect that they are more or less without any chances to close the gap in 2nd half. Normally they have the strenghts to make a close game against Grizzlies. About Sixers... perhaps this was not a good trade. To be honest, it was like a hail marry pass at football. Despite that the Sixers could close the gap in the 3th quarter to just four points... LA Clippers at Toronto was my winning bet. The game was played on a high level, probably one of the best NBA games I ever saw. There were lead changes, three pointers, alley oops, dunks and so on. The last game I traded was Chicago at Charlotte. In the end the Bobcats arranged to make it a very close game. Unfortunately their comeback came just one minute too late.

In general the concept seems to work. The yield of the winning bet was at the level you need to compensate the losing trades. Unfortunately I had too much losing trades. Why? I think was a mix between bad selection (especially Philadelphia) and unlucky outcome. What are the learnings? I have to select better to rise the win/lose-ratio. I have to keep the lost amount smaller at the "red trades". All of the ones you saw at printscreen were -100%. The minus of 70 Euros should be at most around 50 Euros. So, it's important to implement a "redding-strategy" as well.

At tennis I didn't think so much or was it bad luck? Just before the injury of Nadal became obvious I entered the trade. Normally back Rafa at 2.00 is tempting, but today was just stupid. Well, at least I can be really happy about the tournament win of our Staaaaaaaaaaaan, the man. :-)  I staked exactly the amount to land (in a bad case... what happened unfortunately) on a level of 1'000 Euro. So it's time to regroup and start a new counting with the adjusted strategies. Let's see how much ROI I can make with the 1'000 Euros as capital employed.