In today's fifth set between Novak Djokovic and Stanislas Wawrinka was impossible to predict the market. Both players were on fire! Because the past results, the market was in favour of Djokovic. He was trading around 1.30 when the score was tied in fifth set (for example 2:2, 3:3 and so on). A good friend of mine wrote me, that Nole win for sure. You can put 1'000'000 Euro on him... well, I don't have this amount. So I decided not to do it. :-)

Seriously, it's a very good example about value. The game was that tight, but Djokovic was traded around 1.30, that's equal to a winning probability about almost 77%. For me Nole should be traded around 1.65 (60% probability). That's the concept, you are not seeking for winners (nobody has a crystal ball). You are searching for value and at this moment (or more or less during the whole match) was on the side of Wawrinka. I started to lay Djoko at 1.11. Later was an other opportunity at 1.02/1.03 after the first set was over. Take a look on there numbers, 1.02 equals a probability of 98%! It means that Djokovic will win 98 of 100 five set matches against Stan after a 1:0-lead. Of course the Swiss was not playing his best tennis at the beginning, but how you can go for 2% after one set?!

More or less the same happened with Ana Ivanovic and Tomas Berdych. After they were ahead 1:0 (Ana) and 2:0 (Berdych) the odds were imploding. Unfortunately I cutted my profit on Bouchard (I didn't trust her until the end) and lost the bet cause Ferrer was struggling after a strong start in the 4th set. He couldn't take profit from the changing momentum. I made the mistake not hedging the trade. It's a pity that I made it just at trades, which headed in the right direction.

Here we are at the point which is the most difficult for me. A lot of traders make the mistake, to let run bad trades and take profits of  the good bets. You have to do exactly the opposite. The redding strategy is not a mistery anymore for me . If a trade goes wrong, I leave it. There will be a lot of more opportunities. Greening is a lot more difficult. If you do it too frequently, your losses will be too big in comparison to your profits. If you never green the trades, you will lose money like me with Ferrer.

I tried to do a mix at Djoker's game. After 3th I decided to close my liability on Novak. In the worst case my profit would be 0. In the end, the hedging cost me some bucks. I am not sure if it was a good decicion because I sold value (explanation above). In the other hand you have to protect your bank, and I made my (value) profit in the beginning.

Now i have the same staking plans for NBA and tennis. First time in my life as a sportstrader I seriously feel that I (almost) reached stage 4. So it will take six months to run in autopilot. :-) I would happy with it. At the moment it's important to strenghen the dicipline, improve the strategies and develop the inplay trading skills. 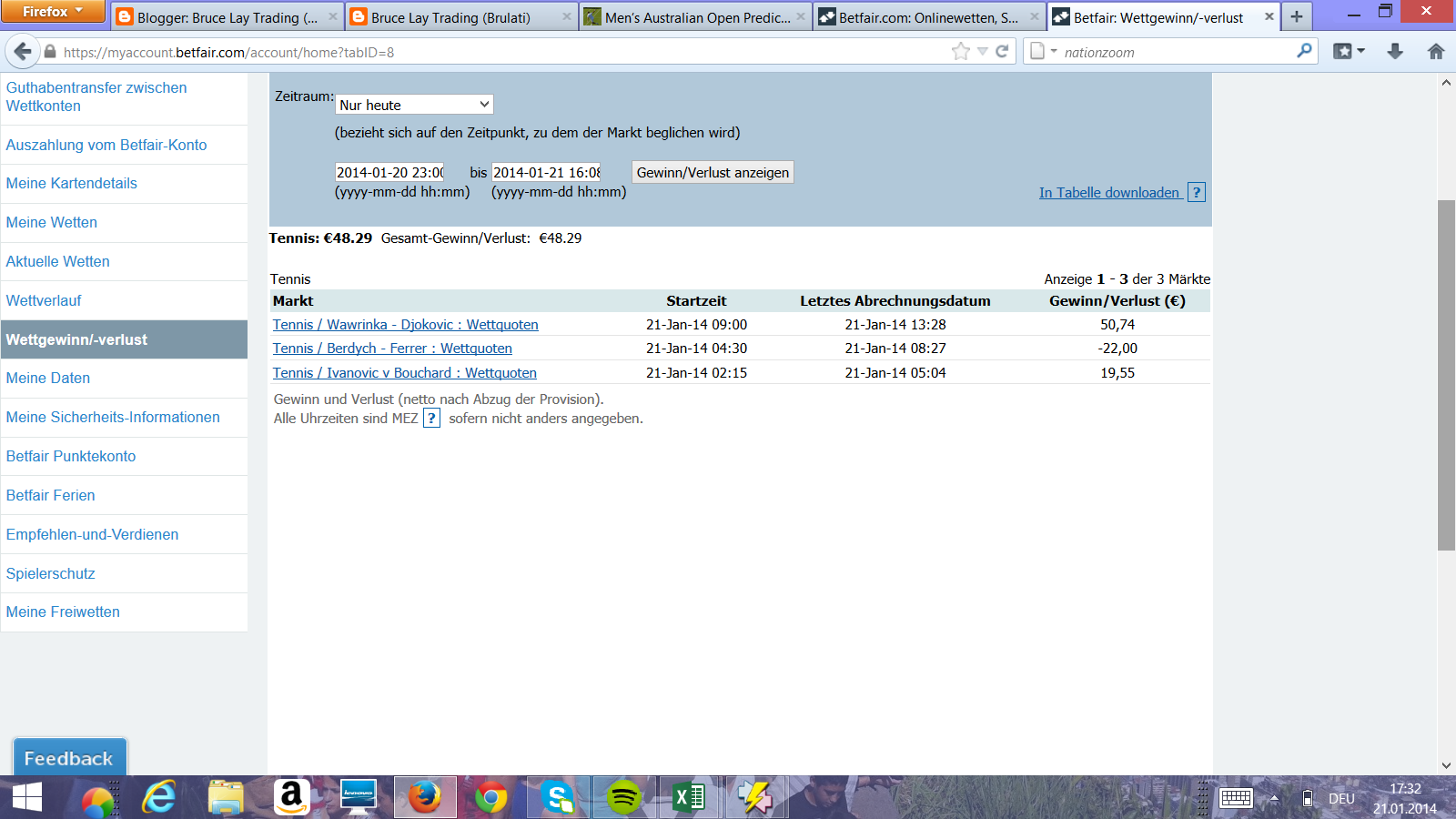