All Swiss final at Monte Carlo

We will see an all Swiss final at Monte Carlo! After Rafa Nadal struggled yesterday, this is not a huge surprise for me. Roger showed an uptrend in 2014 and is normally looking sharp against Novak, and Ferrer has a missmatch (strong serve and backhand of Stan) against Wawrinka. I go even further... despite Djokovic was handicapped today, Roger made another step forward to be in a shape for winning more Grand Slam titles. His mental strength rised again. Yesterday he won against Tsonga while missing the first 15 breakchances (he stayed strong despite staying two points before the out... 2013 he would lose this game for sure). Today he covered two break chances (after he missed himself one the game before). So he pulled Noles' (injured) "tooth".

To be honest, after Fedex missed to convert his breakchance, I became afraid and scratched the trade. I was almost right with this action, in the upcoming game Nole had two break points. In the manner of his best times Roger covered them. This was a shock for Nole, next game he was broken after a 40:0. If Roger could manage the break before, I would be on a nice green trade. So I only managed to make a pre game (scalping) profit. After I heard the rumours that Joker is injured, I layed him big. Even without the injury odds around 1.32 were completely ridicilous. So I was extremely comfortable with this trade.

Perhaps I was a bit too cautious inplay, but that's my (new) trading style. When there is a (possible) big momentum change I react. I the last months or let's say in 2013 for sure, Roger would struggle in such a situacion, but today not. So was bad variance for me and a real sign for the upcoming tournaments for Roger. 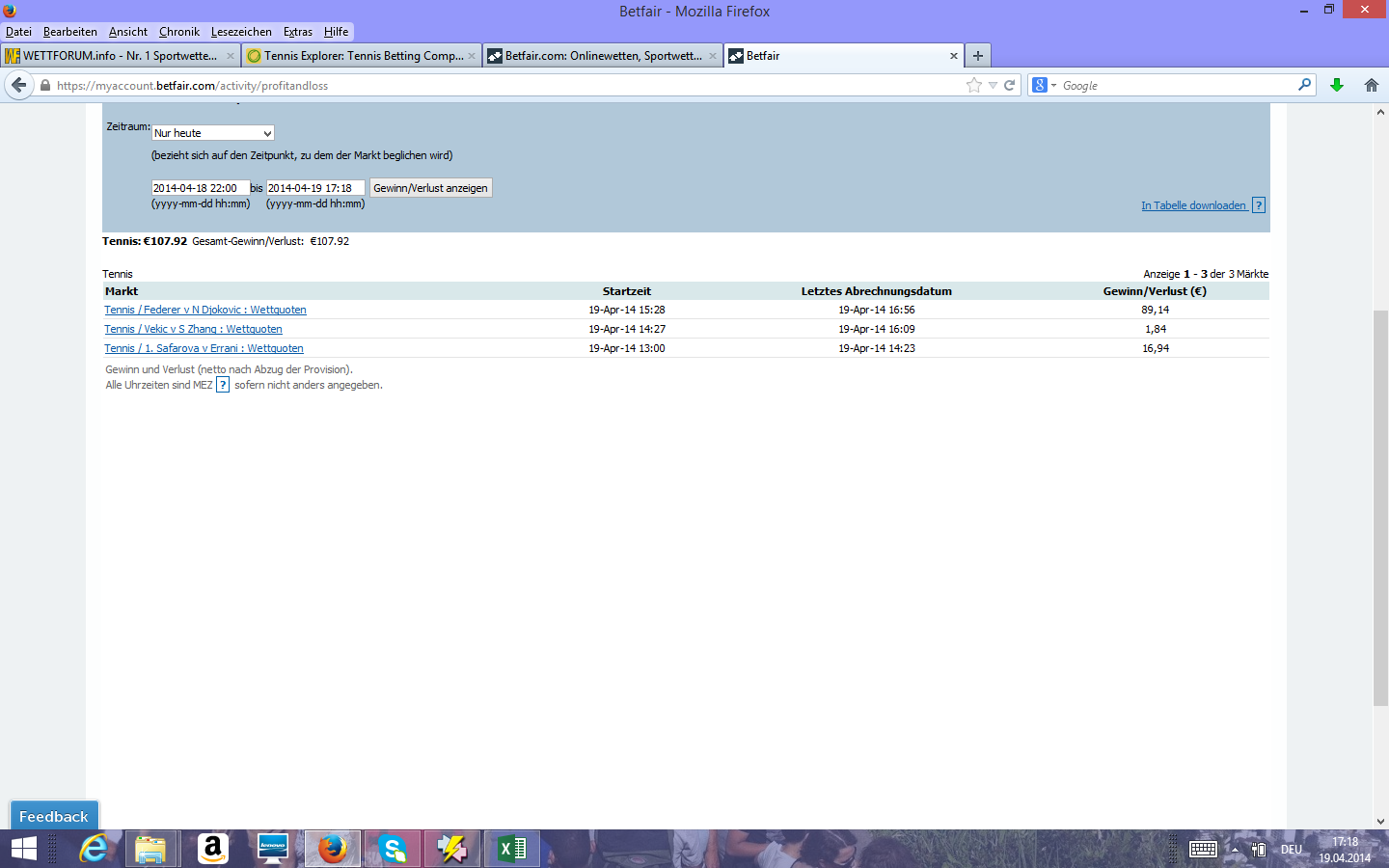 I don't expect a trading opportunity at Monte Carlo final. I don't see so much value at the moment, but you never know how the market reacts inplay.

Unfortunately there were not so much TV and betting coverage during the Fedcup. Ivanovic vs. Cirstea would be a great game to trade (was not on betfair). As well Vekic vs. Zhang, but there I didn't have any TV coverage which I see as a big disadvantage. After I was not fully matched, I decided to exit the trade again. That was a mistake...

Next week is a nice WTA tournament at Stuttgart. Beside we will see tennis action at Barcelona (ATP), Marrakesh (WTA) and Bucharest (ATP). For trading purpose is better to have some (small) tournaments parallel instead of one big one. Normally the 2nd week at a grand slam event is without many opportunities. First there are not so many matchups, second there are often very uneven ones with the very big favourites (Nadal, Djoker, Fedex, Murray, Stan) against the B- and C-League... so I am not missing the Grand slam action yet. For sure I look forward to the big events like French Open and Wimbledon. First time in my life I have time to follow the tournaments during the week (at least three days). Beside I am now very confident that I can make a decent profit with my strategy and the growing tennis knowledge.