Changes of momentum are crucial at tennis. Today underdog Vesely was two points away to win the first set against Dimitrov. After he failed to bring home the bacon his resistance was broken. Especially young players loses their confidence after missed opportunities.

Unfortunately I am still not enough experienced to recognize the real momentum swings. During the set I am often too cautious. I scratch a trade too early instead of giving "my player" a bit more time. On the other hand, I enter (too) often at the start of the second set just at the moment a player lost an important game. Only the very toughest players can go over this disappointment without any emotion.

Today I overcooked. After a good day it's difficult not to become overconfident. I entered too often in the beginning of the match or at the wrong moment.

We saw quiet strange tennis results at Wednesday. Fognini retired after he was down 0:6, 0:4 against Giraldo. Unfortunately the match was not on TV, but I guess it was playing again the very unmotivated (twin of) Fog. He lost now three times in a row a set without winning a game. He is definitely between genius and madness! Beside we saw suprising straight set wins of Gabashvili (against Ferrer!!) and Kleybanova (against Kvitova). I sounds like afteriming now, but Ferrer would be a decent lay for 1.05. "Gaba" played great tennis recently (strong performance against Rafa and Simon at Monaco and an easy win against Przysiezny here in the first round), and Ferrer was not that impressive against Stan. Everybody was impressed about his win against Rafa, but let's face it, Nadal doesn't play his best tennis at the moment. Beside Ferrer lost his first match at Barcelona last year as well.

My suprise picks (Vesely against Dimitrov and Kuznetsov against Cilic) lost in straight sets. I made another learning, I have to consider a bit more the stats. Dimitrov seems quiet solid when he is the clear favourite. He didn't lose a match this year when he was under a 1.50 starting price. He is 17:0 in these kind of games! Cilic lost four matches as a big favourite, so if you consider just the stats he was the better lay. Despite you could make better money with laying Dimitrov. During the tiebreak he was traded short time around even... to be honest I normally don't close trades during a game. So it didn't help me.

In general I am not that happy with this day. In the year to date view I am back in the red zone. My match selection was quiet poor today. After a decent start with good trading (despite two lost and only one winning trade I made a small profit) I was going against my gut feeling. Like I wrote some days ago, I think it's only working when there is value and gut feeling. For example laying Rafa is often short term value (because it doesn't need much that his price is rising from 1.02), but the gut feeling says - despite his average form - "No"... 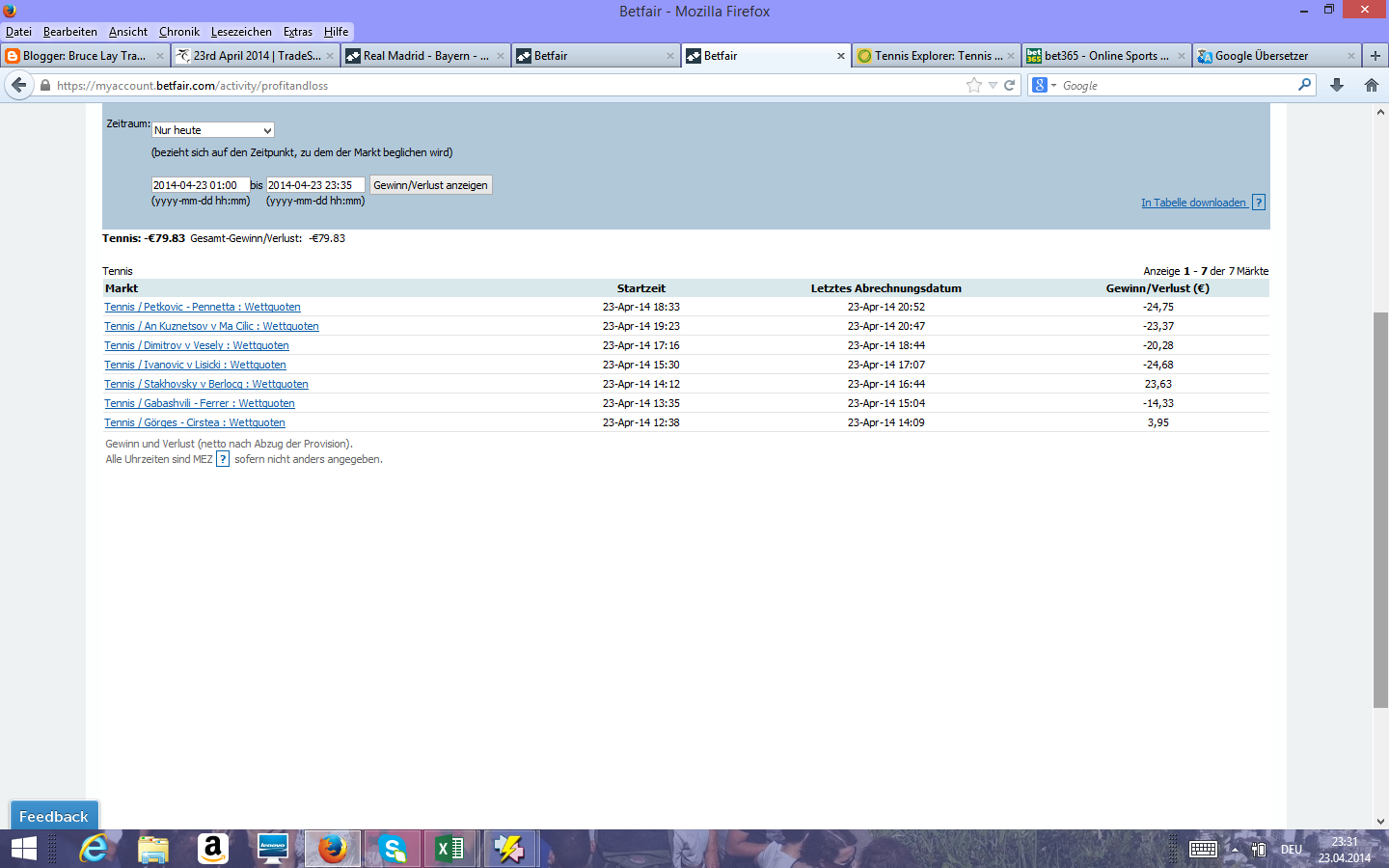 In summary I would say that I know what I am doing. It's just missing the real breakthrough. I am like a young talented tennis player which plays okay, but struggles under pressure and suffers inconsistency. I am like Roberto Carballes. He won at Casablanca against the higher ranked Goffin, Sousa and Kuznetsov. Beside he gave the in form playing GGL a real hard fight in the half final. At Barcelona he lost against Gimeno-Taver in straight sets... In the future I like to be Novak Djokovic or at least a top ten player like Ferrer or Berdych. :-)  They are not winning grand slam titles, but are good and consistent players. Let's see in which direction my way is going...