I should do this before. Today I started to read all the posts of Sultan's blog: http://centrecourttrading.blogspot.ch/

Really great stuff! It feels strange to read how my mentor was struggling just around three years ago. He made all the typical mistakes novice traders do. Especially the lack of patience and discipline is so common. Beside he overstaked and changed the strategy during the year. Moreover he traded too emotional. After a bad trade he became so angry, that the focus was lost for the upcoming matches.

What I can learn from his past? First of all I don't have to care about implementing new strategies. Thanks beeing a member of the Sultan's Trading Academy (The entry was not free, but it's worth the money for sure!) I got his strategy guide. It's not a magical book, but it helps a lot to work with proven strategies. They also help to strenghten the discipline and the money management. Right now I am quiet comfortable with these issues. I am confident that I can soon rise the stakes without losing the control. It's the worst to lose countance during trading.

My biggest issue is still the lack of market and player knowledge. It's such a big advantage to know common patterns. For example Stan Wawrinka is so easy to read. He often struggles at home ground and in general when he feels a lot of pressure. When he is in the flow (and you can see this so easily), he can beat everybody. He demonstrated that at Australian Open. Also the weaker players have these patterns, but a lot of them I barely don't know. I would say that I have a more or less good knowledge of the Top50 players, but that's not enough. You also have to know players like Alison Van Uytvanck, Petra Martic or Somdev Devvarman. All of them are Top100 players... not even nobodies!

Beside is really crucial to watch matches during the week and check the form of the players. For example the win of Belinda Bencic against Sara Errani was not a big suprise for me. The Italian didn't play a really good game against Peng the round before. So it was perfect to lay Errani after she won the first set. Often the market is overreacting during the matches...

What I like to tell... thanks the learnings Sultan made some years ago I can focus on my personal weaknesses. The mistakes he made I don't have to repeat. He always told me that would be a great benefit for him to have a mentor some years ago. I am sure that you can reduce costly mistakes and save time to be a long term profitable trader when you have an experienced person at your side. It seems that my progress continues. Last week I made seven trades, six of them were winners. In the end I made almost 200 Euros profit without risking too much. The return on investment (ROI) on winning trades was around 90%, that is not far away from the number I like to make on a frequent basis. I talked about the issue to make more profit with good running trades. To be positive in the long term this number has to be over 100%. In general I calculate with around -70% ROI on a losing trade. With a targeted win/lose-ratio of around 50% (that it's a quiet good number with these strategies... 6:1 like this week is unusual) the ROI per winning trade has to be high, for sure obviously over 70%.

Next week will be some interesting tournaments all over the world: Bogota (I know pretty well this city :-)), Katowice, Casablanca and Houston. 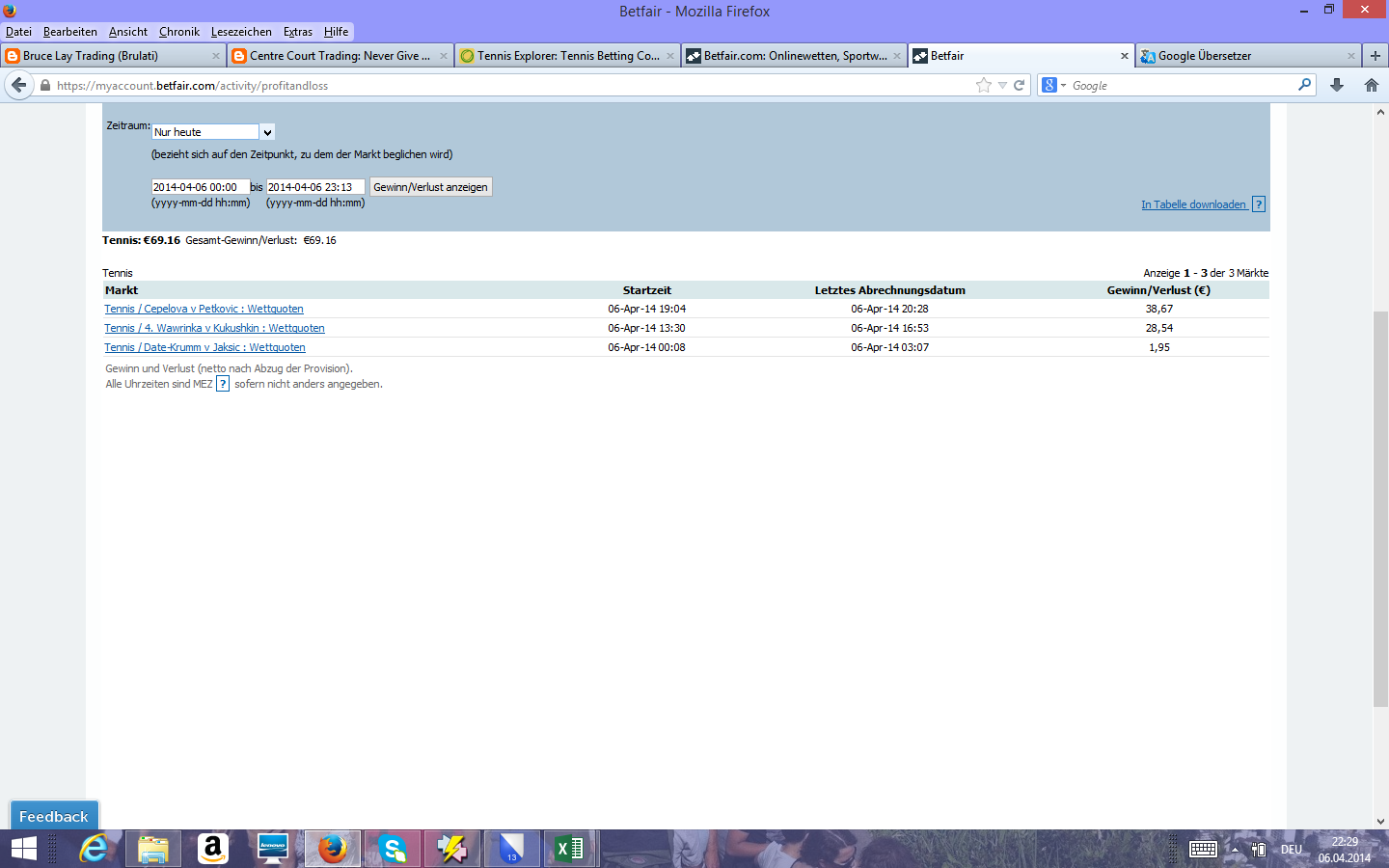