Peter Webb, one of the more famous trader, wrote a year ago:

"This match (he was talking about Djokovic against Wawrinka at Aussie Open 2013) exhibited perfect trading characteristics again. It was another match, where if you were trading, you couldn’t lose. If you backed the outsider his price shortened considerably. If you backed the favourite he won!"

There was a big debate at Sultan's blog about this statement. In the end it was quiet obvious that Peter overreacted with above mentioned sentence. http://www.centrecourttrading.blogspot.ch/2013/01/tennis-trading-fallacy.html

I saw it today with my own trading. I layed Dimitrov after he was a break up against Granollers (4:2 in first set) for 1.15. The value was looking good at this moment. Actually I thought the loss of the first set is already priced more or less in. Unfortunately Granollers really struggled the upcoming games and the odd tanked to 1.05. So I lost at least five ticks just because a market over reaction...

Bad luck or bad trading, I could wait until the end of first set to lay Dimitrov. The value was even better after the first set for sure. You can discuss if my early entry was a mistake or not (aftertiming it's always easy), but afterwards I definitely made a mistake. I reduced my stake at an odd of 1.02. How stupid you can be?! It doesn't matter if you lose 100% of the stake or 95% in every case the back bet of Dimitrov was a ridicilous value. The (part) exit of this trade was a back fall in old terrible times. Thanks the comeback of Granollers I could manage a small green out of this trade. I should be big green, but that's the difference between a novice and advanced trader.

Back to Peter Webb... if you trade bad or the swings doesn't fit in your strategy, you can even lose with a good looking chart and that was the one of Dimitrov vs. Granollers for sure: 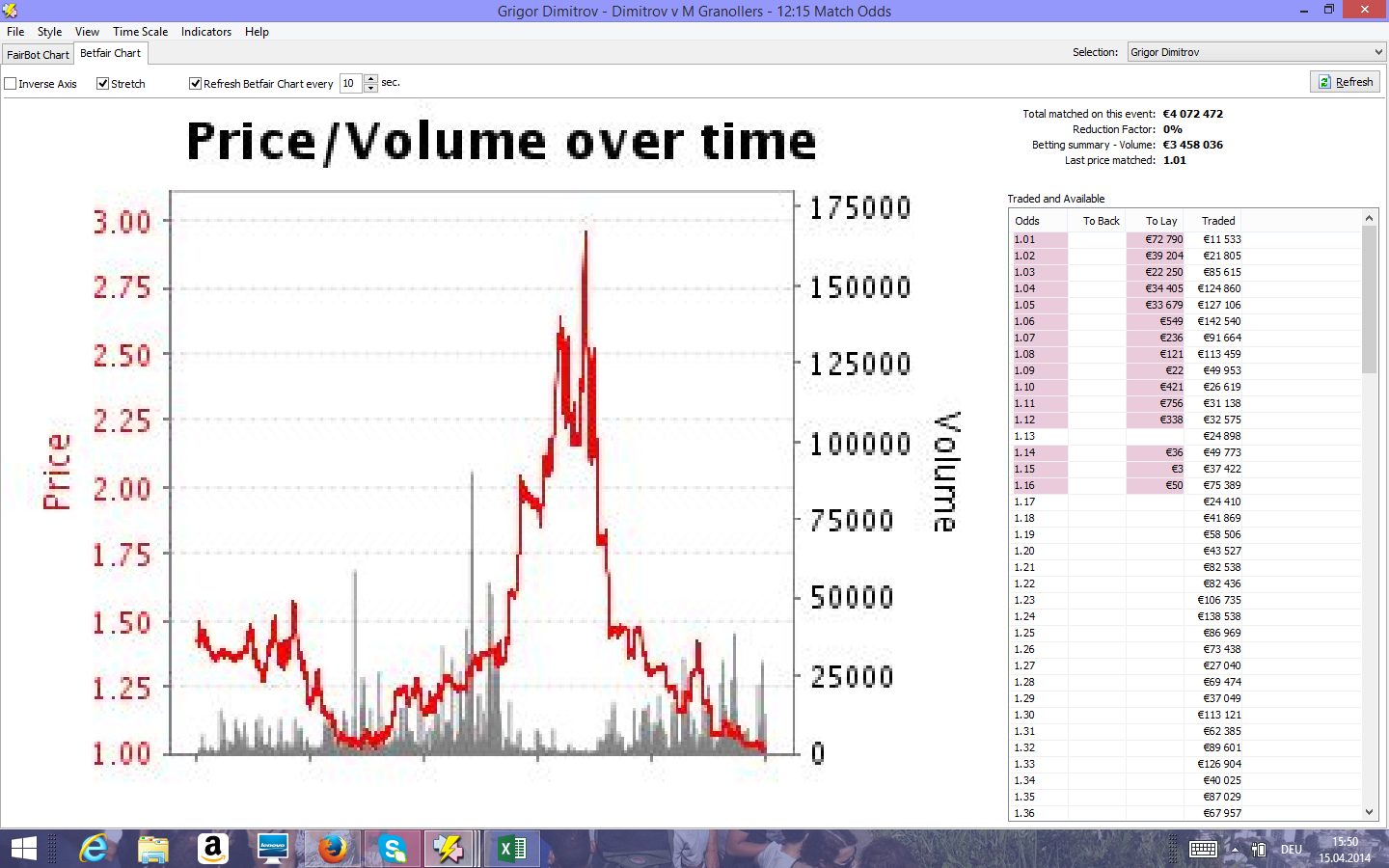 Once more I didn't do a great job. Beside the described trade, I missed to enter at the Tsonga vs. Kohlschreiber match. I was quiet sure that the German will give hard bread for the French man which is still in poor form after his injury. The value was definitely there after the first set, but I was too much focused on the H2H (6:1 for Tsonga). Stats are not useless, but I think they are overrated concerning the trading. Form and things in general are changing during months and years.

To take the good things out my start at Monaco, I didn't lose money despite poor trading. It's definitely a step forward. I can concentrate the next 1 1/2 weeks on my trading skills. I decided to take one day of holiday and thanks to my part time job and easter I have off until the 24th of April!

To have more real time information of the tennis players I joined Twitter. You can follow me @Brulati.
Posted by Brulati at 15:52