Sultan told me all the time that I don't have to look for winners, I have to trade instead the market. In the beginning I didn't exactly understand what he was talking about. After some months I got the lesson. A nice example it's todays final game at Katowice between Alize Cornet and Camila Giorgi. Before the start I saw a little value on the side of Cornet. She was traded around 2.10, for me it was a typical 50/50-game. The French was impressive in the half final against Radwanska (at least since the 2nd set) and has more final expierence than her younger opponent from Italy. Pre game the value is normally slim (I was talking about) and so it was here. So I decided to wait.

After the first set (7:6 for Cornet) the value was totally gone, the French was trading around 1.40... The game continued and Cornet went ahead with 3:0. Now the market overreacted, it was still a long way to go (and they played more or less on the same level), but the odd of the French was hammered to 1.07. So that was the point to enter the trade. At this point Giorgi had nothing to lose and all the pressure was on Cornet now. Not so surpising for me that the French lost the 2nd set... So I could green my bet.

Let's summarize... at the start (a slim) value was on Cornet, at the beginning of 2nd set there was no value at all and after the French went ahead 3:0 in the 2nd set she was traded too low. So Sultan is completely right, it's not about picking winners, it's all about trading the (overreaction of) the market. 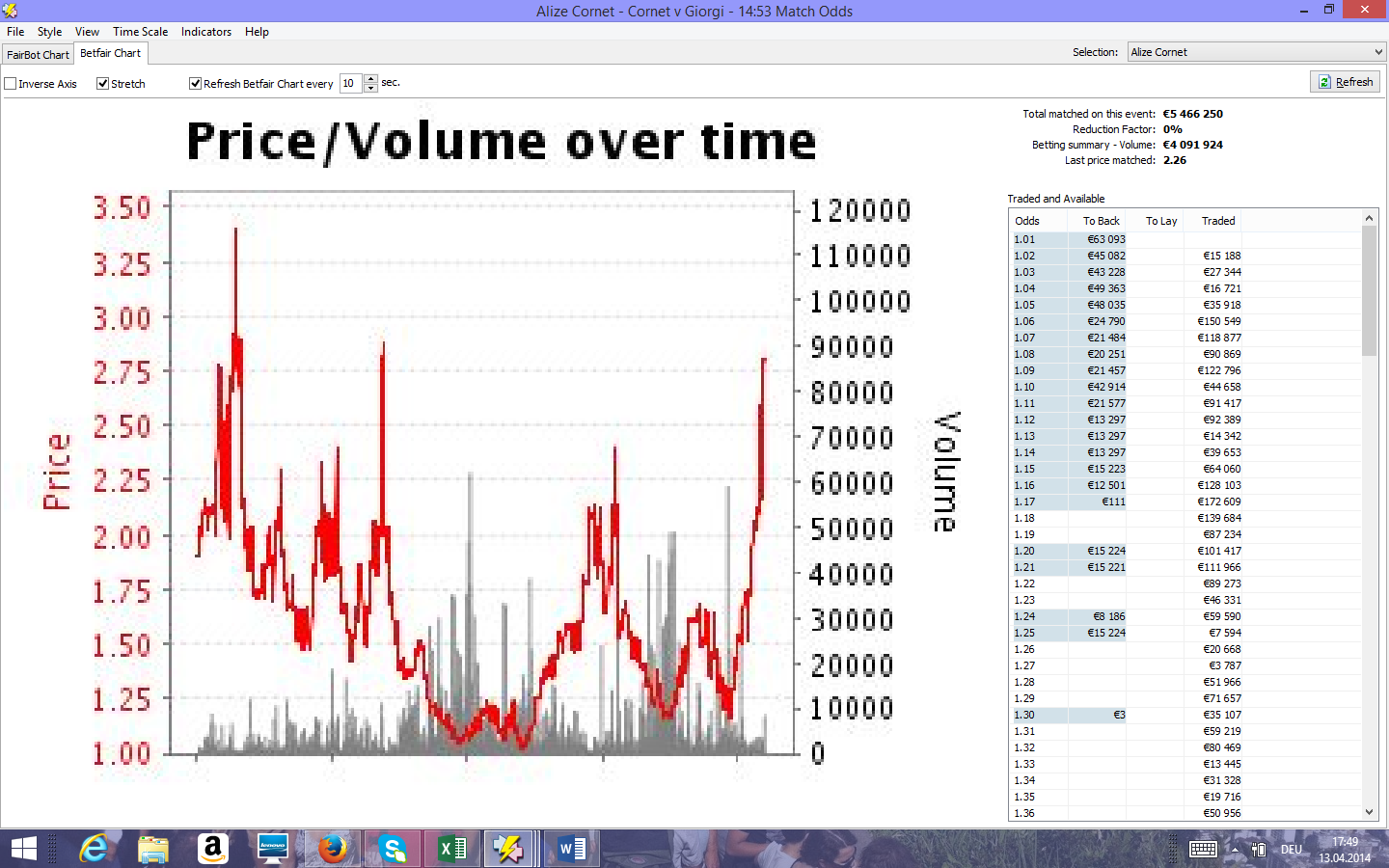 Unfortunately there was no TV coverage for the matches at Monaco. So I decided not to trade these games. Sometimes I saw value, especially at the Sijsling vs. Chardy game. So I have to think if it's worth it to trade a match just with a quick scoreboard. I disscused this topic once with Sultan. 98% of his trades are made with TV pictures... If you trade just with scoreboard the gut feeling can't work that good (for example you don't see if a player is injured). So these trades are a bit riskier.

Beside I learnd not to trade parallel games. Sometimes you miss an opportunity, but in general is better (because you can't concentrate on two or three games at the same moment). Actually is more or less like trading without TV Coverage. Unfortunately today were two good games parallel: Giorgi vs. Cornet and Granollers vs. Garcia-Lopez. Both matches brought a lot of swings which are good for my trading style...