Let's start with the good news first. Today I traded quiet well, not considering the profit, but the value seeking, patience and discipline were (with one exception) satisfying. The bad news is that I traded a whole day for (almost) no profit. 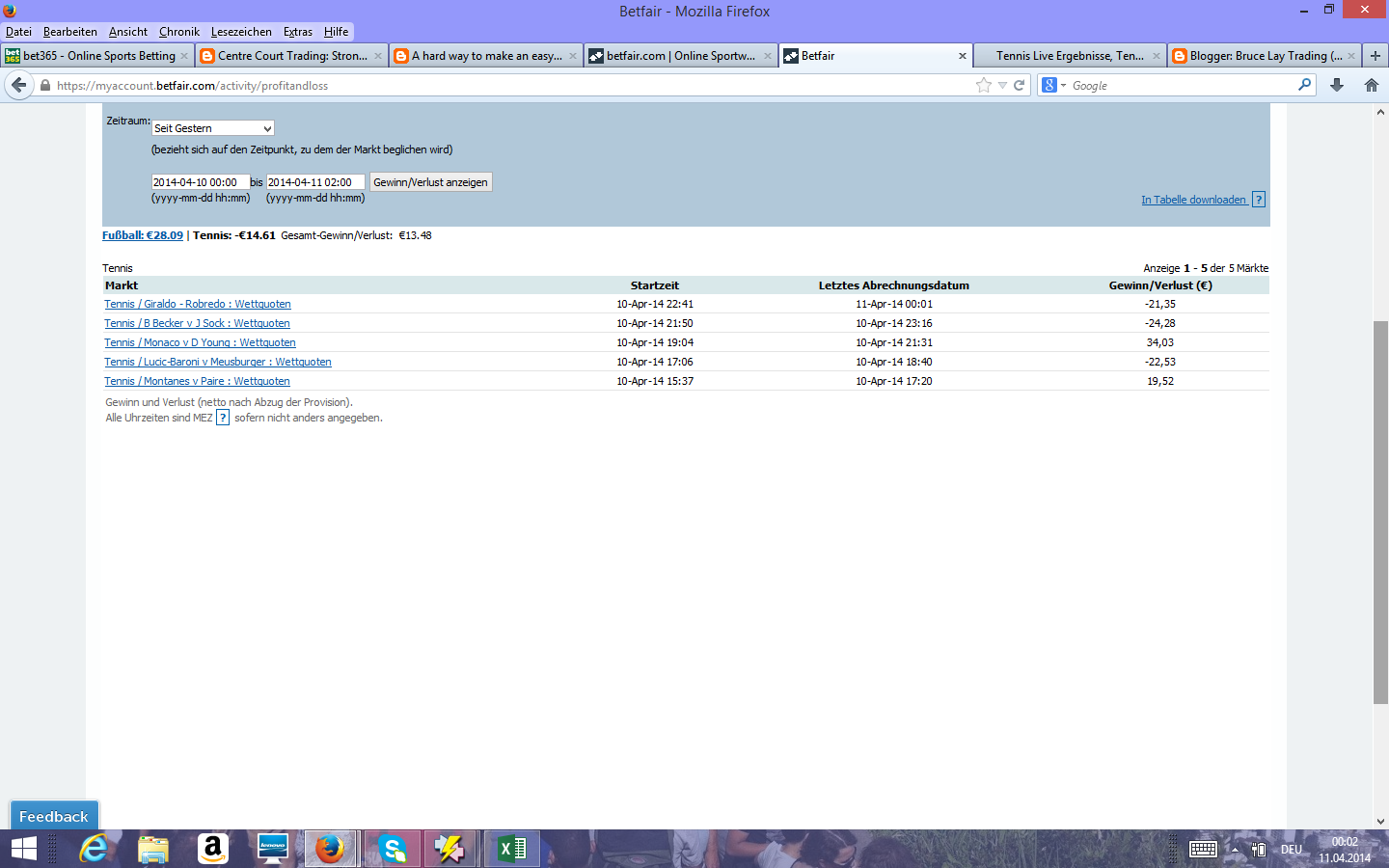 Let's go through the trades: Paire vs. Montanes, I made a small profit. The only thing I could improve is the stage after the trade went green. I wanted to stay longer on Montanes, but he struggled in the 3th set. So would be better to take (more) profit after 2nd set. Afterwards I would even say that the value was before the 3th set on Paire... but well, this topic issued Raistenique at his nice blog: http://betfairtennistrading.blogspot.ch

Even Cassini was talking at an interview with Sultan about it. If your green is (still) value you should not hedge. But who will do this consequently? The most horrible for a trader is a green position which turns red. You can read a lot about this topic at Sultan's Blog... So in theory would be right not to hedge and a robot would do it, but as a human is almost impossible to trade like this. Especially if you need the greens to pay your bills.

Second trade was Meusburger vs. Lucic-Baroni. I still could vomit thinking back about this game. Lucic-Baroni dominated every rally and the Austrian was just waiting for the mistakes of the croatian girl. And she made a lot of them... for example more than 10 (!!) double faults. I never saw such a dominating performance with so a poor result. What I could do better? I should scratch the bet after Lucic-Baroni arranged the rebreak. I was talking with Sultan, he made the same trade. So the value was there. Instead of me, he scratched the bet... here you see the difference. The good traders are especially better in situation which the things are going against you!

Monaco vs. Young was probably my best trade today. It's not only because it was the largest profit, it's how I chosed the entry- and exit point(s). Afterwards you could tell that I should reenter after Young lost the first set, but like Sultan I prefer to move to another game after I decided to close the position. In and out over three sets is not our style... It's better to take a look on other players to check their shape.

Becker vs. Sock was definitely my worst trade of the day. I thought that laying Sock from the start was value. But it was definitely not. I "forgot" how limited Becker plays and how strong Sock can play on homeground. 1.35 at the start was the fair price. Beside Sultan is right, it's extremely hard to find value before the start (because the market normally doesn't overreact like inplay).

Last trade (Robredo vs. Giraldo) was okay. At the time I went in, a comeback of Robredo was quiet probable. Giraldo often struggles serving home a match. Today he was strong, despite Tommy had his chances to win the 2nd set. Perhaps I missed the opportunity, to lay Robredo in the beginning... the market overreacted at the start in the direction of the Spaniard.

If you look precicely to the the profit&loss screenshot you can see a soccer bet. Yes, I did one (even if decided not to bet football anymore). Was too tempting to back Valencia against Basel when they were up 2:0. Was all about the Spanish team and was only a question if the make the 3th and 4th goal. So i backed Valencia for the odd of 1.03 to win the game. Sometimes even 1.03 can be value... Okay, as Swiss and FC Basel supporter I was a bit disappointed, but for the risk of 1'000 Euro, I was at least hoping that Valencia will win the return leg.

Normally I don't do this high stake bets for a small profit anymore, but that was a gift. How in the hell could Basel win or tie this game at the score of 0:2 with around 7-8 missing first team players?! I guess that only profit takers offered the 1.03 odd. At most I would give 1.01... So was huge value!

Tomorrow I have to work, so I will definitely trade less. Actually it's a pity because I feel an improvement. The working days interrupt this flow, but at the moment I am happy about the financial security my regular job gives to me. I think it's still the right time to make it semi professional. Right now I am thinking about reducing from 50% to 40%... so I would have five full days (including weekend) to trade. In the long future I like to reduce trading times again (when I can arrange good profits with bigger stakes), but now it's all about gaining experience and player/market knowledge.